Building A Kubernetes Homelab with K3S and Raspberry Pi 4: The Hard Way

K3S is one of the best solutions available if you want to deploy your own Kubernetes cluster inside your homelab to play with, or just for learning purposes. And it is really easy to get started with a couple of (actually, you only need one) Raspberry PIs. But “What is K3S?”, you might ask. From their website ;

Although that there are other ways to run Kubernetes with limited resources, I found K3S is the most expandable, upstream-compatible, tweakable, and production-ready alternative for full-fletch Kubernetes clusters deployed with kubeadm or similar.

There are some fantastic tools available like k3up to get you started with your cluster fairly quickly, but in this article, I will focus on how to do things, the hard way, with lots of references for advanced reading material as well.

So, buckle up and get ready because we are starting!

The main components of K3S are called K3S server node(s) and K3S agent node(s). K3S server node(s) is responsible for managing the cluster, running SQLite or etcd, hosting the API Server, and act as a scheduler, as a regular Kubernetes master node. K3S Agent on the other hand is just like the regular Kubernetes worker nodes. You can find more information in the official K3S documantation .

You can have a single-node K3S server with an embedded SQLite database which will also act as an agent node, or, you can have a combination of server node(s) with one or more agent nodes to support different use-cases. K3S, by default, uses SQLite, Flannel, and Traefik Ingress Controller and comes with a local-path storage provisioner to handle stateful applications, therefore, it is a really good option to deploy on IoT devices, etc.

K3S can also be a great option for more advanced stuff as well because of its configurable nature. Only with some minor tweaks on default settings, we might end up with an almost production-ready Kubernetes environment, and in this article, we gonna do just that!

Although that I am generally happy with the default settings of K3S and 32-bit Raspberry Pi OS, I decided to spice up things by making some interesting design choices.

so the final design will look something like this; 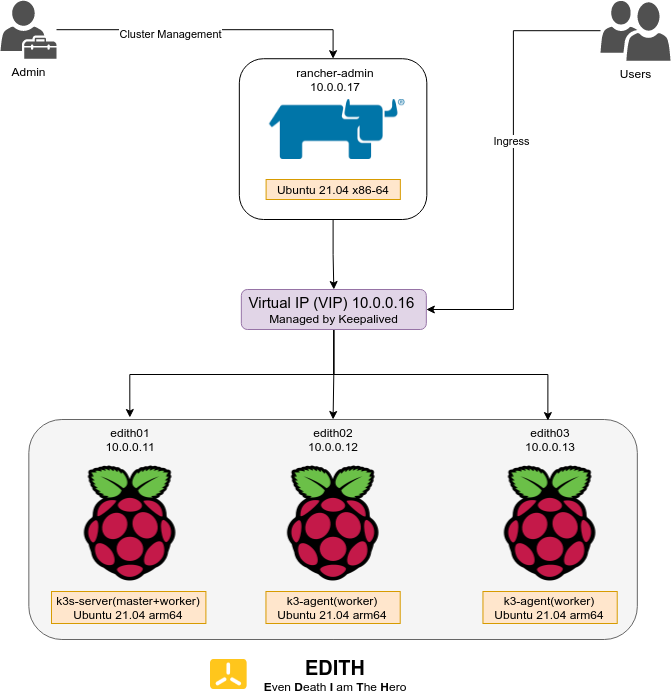 In this guide, I will assume that you already have the OSs ready, so I will skip the OS installation details. But if you need to prepare your OS first, then check this great guide from Ubuntu to get started.

You need a domain name (such as home.lab). This could be internal or external (real).

We will first start with configuring the Keepalived between our K3S nodes (PIs) to set the Virtual IP (VIP).

“Why do we need this?”, you might ask. Kubernetes API server exposes port 6443 to communicate with external clients, such as kubectl or our Rancher management node. But if you have multiple K3S server nodes, then you need a LoadBalancer on top to distribute the incoming traffic across the nodes and have protection for outages on one of your server (master) nodes. 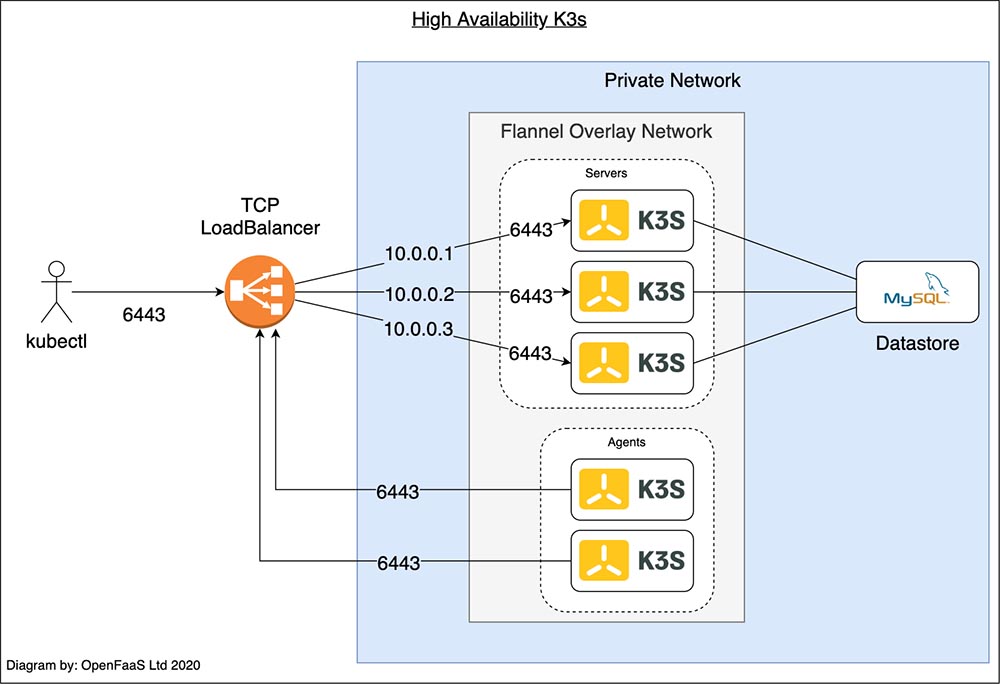 In addition to that, you also need LoadBalancer to balance your ingress traffic between your agent (worker) nodes to access your services. Therefore, we need an external LoadBalancer on top of our cluster, or, we can use Keepalived to share the VIP address between the RPI nodes.

In order to install Keepalived, you need to run;

on each of your K3S nodes (edith01, edith02, and edith03 for my case). After the installation, we need to configure keepalived to dedicate an IP as VIP and set the priority between our nodes before starting the service. I will use 10.0.0.16 as the VIP.

You can see the example configs for primary and the secondary nodes below;

After changing the config in each node and setting the priority levels (primary - highest, secondary - lower) and the virtual_ipaddress, you can enable and start the keepalived service with;

and you can test the failover scenario by shutting down your primary node, just for fun :)

2) Enable Legacy iptables instead of nftables

nftables is the successor to iptables and it replaces the existing iptables, ip6tables, arptables, and ebtables. If you are interested in the details, check out this amazing article from Gentoo Wiki . The newer versions of the most common Linux distributions, such as RHEL 8, CentOS 8, Debian Buster, Ubuntu 20.04, etc, already switched to nftables but K3S does not support this yet .

Ubuntu 21.04 comes with nftables, by default. You can check your current backend with;

In order to switch back to legacy iptables backend, run;

then check your backend again,

and reboot. You need to do the same steps for all your nodes (obviously).

K3S needs cgroups to start the systemd service. cgroups can be enabled by appending cgroup_memory=1 cgroup_enable=memory to /boot/cmdline.txt.

and reboot. You need to do the same steps for all your nodes (obviously).

Deploying the K3S-server and K3S-agent nodes is pretty straightforward, especially if you want to stick with the default settings. But as I said in the previous chapter, I wanted to deploy my cluster with Calico instead of Flannel (K3S default) as CNI, Nginx Ingress instead of Traefik (K3S default) Ingress and etcd instead of SQLite, therefore, we will add some additional steps and flags to the default command.

In order to use etcd in the HA mode, you must have an odd number of server node(s) and should deploy the cluster with --cluster-init flag. Although that I only do have one server node to start with, etcd should adjust itself and automatically upgrade into a cluster configuration when I add additional nodes in the future. In addition to that, I will also disable Traefik, Flannel and servicelb in order to use nginx-ingress, Calico and Metallb instead. I will also set --cluster-cidr=192.168.0.0/16 and change the default value in order to deploy Calico without messing with the default Calico yaml files.

If you also want to check out other options as well, such as cluster-domain etc., you can see all of the configuration options from here .

Before we deploy our server node with the desired config, we should create a server token. We will use this token in the future while we want to register our agents (and any other future nodes) into the cluster. I am using an online base64 encoder to generate random string as a token , something like this;

And finally, deploy your server node with;

and you can check the status of k3s-server with;

and of course, you can check your K3S cluster (it will become a cluster in a few steps anyway) with kubectl;

If you want to delete & re-deploy, you can easily do that with running k3s-uninstall.sh

Before adding new nodes to our cluster, we should first install our CNI of choice, Calico, although that you can also install something different , to the cluster in order to have the software-defined networking ready and available.

Calico is best known for its performance and network policy enforcement capabilities. I also experienced some weird DNS resolving issues with the Flannel overlay network and found out an open Github issue linked with it, and the only working solution was to use --flannel-backend=host-gw instead of default VXLAN backend, which I do not like. If you are interested in different CNIs, feel free to check this great article from Rancher Blog .

In order to get started with Calico , you just need to run;

this will create a couple of CRDs along with other things and a Daemonset which will run on each node. You can check your deployment status with;

If your Calico daemonset is in READY status, then you are also ready to proceed.

Although that I will not add additional server nodes to my cluster right now, you can easily achieve this by copying your node token from /var/lib/rancher/k3s/server/node-token on your first node;

then run this command on the node that you wanted it to add to the cluster;

Dont forget to set <vip or domain name> and <your-node-token> fields it the above command. This might take ~2 minutes to complete.

You can check the status of your cluster with running;

on your first node. Repeat this step for each node that you want to add to the cluster. Agent nodes will have control-plane,etcd,master as their cluster role.

Deploying agent nodes are almost the same as the additional server nodes, except with a slight difference in the last command. Again, start with copying your node token from /var/lib/rancher/k3s/server/node-token on your first node;

then run this command on the node that you wanted it to add to the cluster;

Dont forget to set <vip or domain name> and <your-node-token> fields it the above command. This might take ~2 minutes to complete.

You can check the status of your cluster with running;

on your first node. You might also want to check your pods as well;

Repeat this step for each node that you want to add to the cluster. Agent nodes will have <none> as their cluster role, this is normal.

5) Deploying Nginx-ingress instead of Traefik

Our cluster is ready to roll, except for an ingress controller to expose our services to the outside network. If you remember, we initiated --disable traefik flag to disable the default traefik ingress controller, during the initial deployment of the cluster. But if you did not, you can still disable traefik with changing the /etc/systemd/system/k3s.service/k3s.service file and add --disable=traefik flag.

then you can reload the configuration file with systemctl daemon-reload command and restart the service with systemctl restart k3s.service. This should automatically remove traefik from your cluster.

We will use the official nginx-ingress Helm Chart to install Nginx Ingress Controller and I learned from our friends from SUSE that K3S has this nice feature that allows us to deploy Helm Charts by placing a yaml file under /var/lib/rancher/k3s/server/manifests.

I used this knowlage base article from SUSE but while doing so, I realized that in their yaml file, the chart name and version are not written correctly. Therefore, we will change the commend slightly;

This will automatically trigger K3S to deploy ingress-nginx Helm Chart in DaemonSet mode with hostNetwork enabled. You should see helm-install-ingress-nginx-xxx deployment being created under your kube-system namespace.

Enabling hostNetwork will ensure that our pods running in the cluster will use the network of the host they run and the NGINX Ingress controller will bind ports 80 and 443 directly. If you want to learn more about this or check any other alternatives, please check here .

You can check your deployment status with;

To the Future and Beyond

From now on, we are ready to deploy and run stuff in our K3S cluster in Raspberry PIs and we finalized all of the steps, except the optional ones in my wishlist at Design chapter.

The optional points will make your cluster more expandable, especially with the CSI interfaces such as Longhorn, and will automate some painful stuff such as Let’s Encrypt SSL certificate renewals and cluster management with Rancher GUI but they are not mandatory for your cluster to function, therefore I will be covering those topics under separate post.

See you next time!